A priority queue is typically implemented as a binary heap. The std::priority_queue<> class template in the C++ standard library is such an example. There is a reasonably good explanation for how they work on Wikipedia, but I'll go through some operations anyway since it leads naturally to the optimization process.

The heap is a partially sorted tree-like structure. Below is a heap with the letters 'a'-'i'. A parent node always has higher priority than its children. In this example, 'a' has the highest priority. There is no order between the children, though. Either can have higher priority. 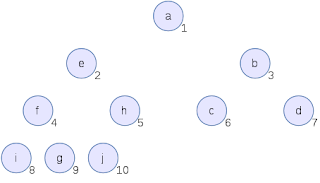 Both insertion and popping the top element are O(log2(n)).

The clever thing about this is that it fits very well in an array. The above heap could as well have been drawn as below.

Traversing the nodes by doing division or multiplication by 2 on indexes is very fast compared to following pointers in a traditional tree structure.

A drawback, however, is that when the number of nodes becomes large, the distance between parent and child becomes such that only the ones nearest the root share a cache line. Assume for the sake of illustration that each cache line can hold 8 nodes. With a large heap, the result will become as illustrated below, where each color is one cache line in size.

The top 3 levels are fine, as they are all in one cache line, but after that each step towards a child or towards a parent is on a new cache line. This can become a performance problem since the caches are severely underutilized. You read a whole cache line only to access 1/8 of it. If you pop the highest priority element, the first cache-line will get accesses to at least 5/8 of its data, which is good, but the rest will get at most 2/8 accessed.

This leads to the idea of another arrangement, a heap of mini-heaps, or B-heap as it is also called. There is a brief explanation on Wikipedia.

If the mini-heaps hold 7 elements, the cache graph above instead becomes like this.

The grey triangles each represent a 7 element mini-heap. This is better, but not that good, and the index calculations become very complicated. Within each mini-heap, you make the multiplication or division by two, but the index to the parent of the top of a mini-heap and the index of children in the last row of a mini-heap is very different. Both involves modulo 7 calculations, which are not very fast. I implemented this and ran some benchmarks, but it was slower than std::priority_queue<>, despite having substantially fewer cache misses, which was rather disappointing.

Another idea is to deliberately waste space and although each mini-heap will hold only 7 values, it will consume the space of 8 values and thus a whole cache line. The result is illustrated below. 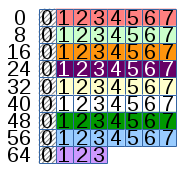 This is much better. The lower image illustrates the layout in an array where the numbers to the left are the array offset to the beginning of the mini-heap. Offset 0 in each mini-heap is not used, which makes the parent/child calculations within a mini-heap multiplication or division by 2. With mini-heap size of 8 (or any power of two) the checks for mini-heap root or last child in mini-heap becomes simple bit masking operations, which are very cheap. Calculating hops between mini-heaps is more elaborate, but is limited to multiplications or divisions by 8, and those are fast.

In the above case, inserting a new element is guaranteed to touch at most 2 cache lines, even if the added element will replace the root. Compare with the first binary heap layout which would touch 4 cache lines to replace the root. Also, the more elements in the B-heap, the better it becomes, because of the huge fan out. Each mini-heap has 8 mini-heap children, so the number of cache-lines to touch when traversing between leaf and root are log8(n).

After implementation, I ran a number of performance measurements. The graphs presented here are generated on an Intel i7-4500U CPU running Ubuntu 15.04. The test programs are compiled with g++ 4.9.3 using the flags -O3 and -std=c++14. The CPU has a 32K L1d cache, and each cache line is 64 bytes.

Of the different measurements made, the most telling one is where a heap is filled to a certain number of elements, then operated on. In pseudo-code:

I have rather arbitrarily chosen 'n' to be 320. It's large enough to exercise the memory a bit. Pushing is done from a large array pre-populated with random numbers.

The first measurement is a priority queue of ints. There are room for 16 elements in each cache line, so measurements are made with mini-heaps of 8, 16, 32 and 64 elements. The graph displays the relative speed of the B-heaps with different mini-heap sizes over std::priority_queue<int>. 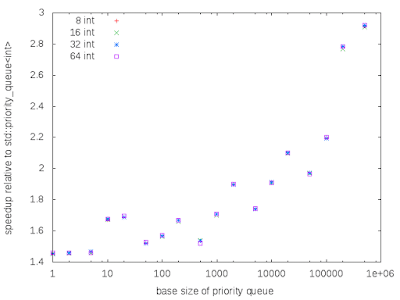 Two interesting observations here. It's always faster than std::priority_queue<int>, and the size of the mini-heaps does not seem to matter much.

However, a priority queue of just integers is almost always uninteresting. Usually the priority is associated with something, a message for example. A reasonable implementation is to let the priority queue hold the a std::pair<int, std::unique_ptr<msg>>, and prioritize on the int. 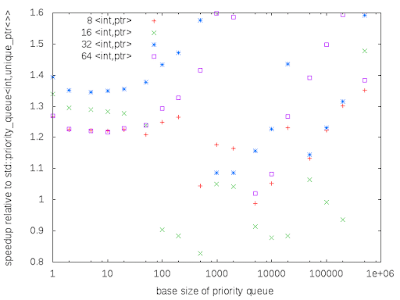 This is wild and difficult to say anything about. There are even examples of worse performance than std::priority_queue<>. I do not understand what causes this.

This leads to another idea, though. The priority queue could hold two data structures. One being the B-heap of priorities, the other an array holding the pointers. They are connected via the indexes. There are two advantages with this. One is that it holds the B-heap of priorities tight. Popping the top object always involves moving the highest priority child up, so reading the value of the lesser prioritized child is a wasted read and can evict more valuable data from the L1 cache. With a tighter B-heap structure that waste is reduced. Also, the structure holding the pointers is only touched when actual moves are being made, it's not touched during the tests. These together is likely to give better performance. 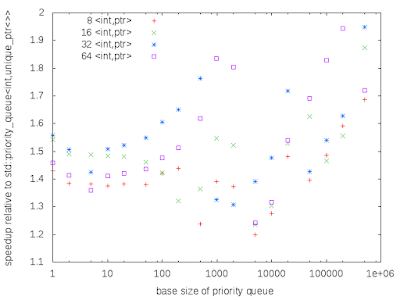 Well, it is still all over the place, but at least it's now consistently outperforming std::priority_queue<>. We can also see that a mini-heap size of only 8 elements is consistently bad. I expected a mini-heap size of 16 elements to be the best performer since 16 ints takes up exactly one cache line, but this is obviously not the case. The bigger mini-heaps outperforms it most of the time. I do not have an answer for why this is so.

Yet another idea is to continue with the separate storage for the values, but keep the unique_ptr<> in an array outside the priority queue, and use the index into that array as the data associated with the priority. This has two advantages in addition to the advantages outlined above - it further shrinks the data set being operated on, and ints are very cheap to move, relative to unique_ptr<>. 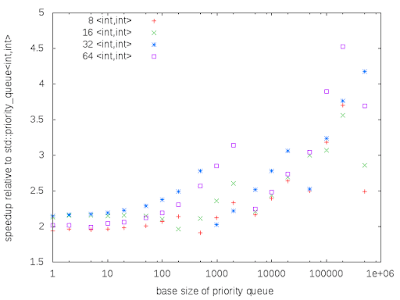 This is consistently much faster than std::priority_queue<std::pair<int,int>>. It is still difficult to say much about the preferred mini-heap size, except that 8 is too small and suffers, and that my idea of 16 being the optimum was wrong.

Source code for the priority queue, including the benchmark program, is available from github.
Posted by Björn Fahller at 14:30