It has been very frustrating, on and off, for a few days now, and I thought that if I write down my findings someone else may perhaps find them and be saved the frustration.

The background. I have a few open source C++ libraries hosted on GitHub. They are well covered for Linux builds with both clang and gcc, and have had poor, if any, coverage for Microsoft's MSVC. I should say right away that the frustrations were about build environments, and not about peculiarities of MSVC, which Linux C++ programmers are otherwise well known to be tripped by.

A few days ago, I decided to split the single header file template library strong_type, into several small headers, and split the unit test sources similarly.

This had the effect that build times for Windows went from around one minute to around 4 minutes. On Linux I used Ninja for parallel builds, and it was not much affected by the change.

As far as I can tell, the --parallel flag did bugger all on Windows.

Search for how to build with Ninja on Windows in github actions. Unfortunately this search lead me to several actions for installing Ninja on the github actions marketplace. I tried a few. They all involve an extra step in the pipeline, but it only adds a few seconds, but the clincher is that they change the compiler to gcc instead of cl.exe.

More searching found several explanations for why this is exactly what you want (what???), but that if you insist, you just explicitly set the compiler to 'cl' and all will be fine. Except that CMake now said it couldn't find 'cl'. 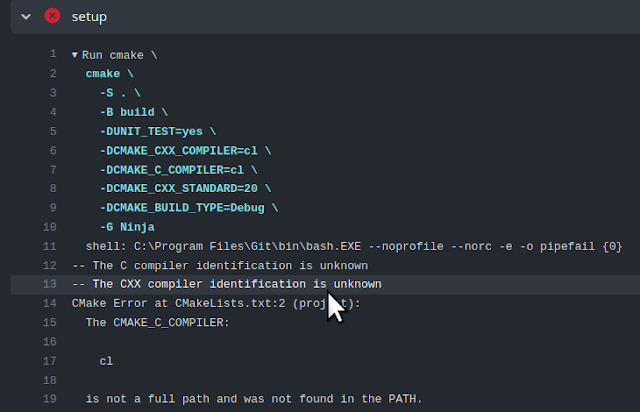 At this point I decided to shelve ninja and instead direct my attention to strengthening the warning levels.

I want to adhere to strict C++ and clean builds at high levels of warnings, so I added -DCMAKE_CXX_FLAGS="/permissive- /EHsc /W4 /WX" to the CMake command line. This  caused all types of problems, because apparently the quote isn't carried through and CMake made a complete hash of all its arguments.

This, of course, lead to some advanced quotology, i.e. randomly changing quote characters, nesting quotes, escaping quotes, order of quotes, until suddenly it worked with -DCMAKE_CXX_FLAGS="'/permissive- /EHsc /W4 /WX'". As with any CI problem, each tiny change is a commit/push/wait/observe cycle.

Fourth attempt: Back to Ninja again

By this time I had stumbled upon the information that Ninja is available in the build images already, so no need to add it as a separate step. I also learned that there's a tool named 'vcvarsall.bat' that sets up the environment. Unfortunately I also learned that the location of that script depends on the version of Visual Studio installed, and since I'm not a regular windows developer, I'd have to go through the frustration of finding out the path whenever there's a new visual studio. Fortunately, it turns out that GitHub user Oleksii Lozovskyi (@ilammy) seems to have taken upon themselves to carry that frustration for us, so that we don't have to, by publishing the github action ilammy/msvc-dev-cmd@v1. Just use it as a step prior to running CMake. This now works, with "-G Ninja". Woohoo! 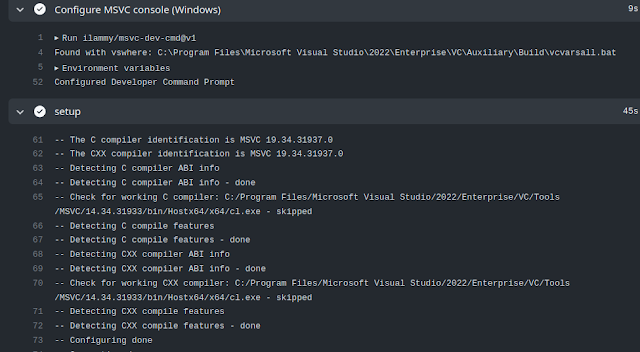 Result: Around 90 seconds for Windows builds instead of 4 minutes, and better warnings.

Here's an excerpt from the ci.yml file:

90s, with huge variability I might add, is not as fast as I'd like it to be, but it's a huge improvement over 4-ish minutes.